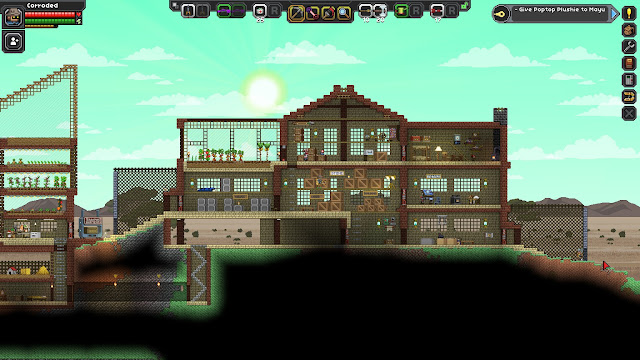 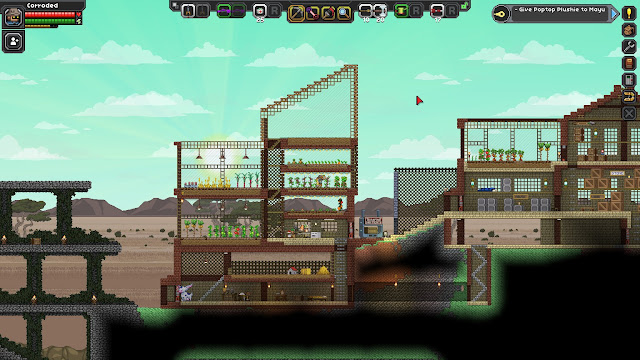 Posted by Ravenblack at 5:17 PM No comments:

A warehouse to store all the stuff that I mine and buy. Plunder of the surrounding planets to follow. 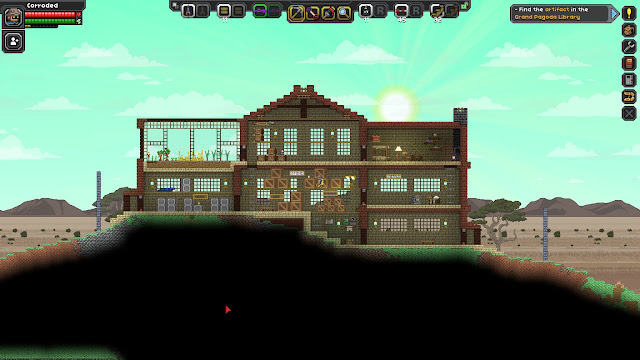 Posted by Ravenblack at 9:00 PM No comments:

The castles span over chasms and there's still lots of space to fill in to make it look better. I think they both need more beams and rooms so things look more supported. There's a lot of other issues too but I guess I'm still learning (and I am a slow learner). I probably need to be more consistent with patterns and the game's blocks allow for more details to put in, so I should really try to put in more effort to creating something less boring and plain.

I'm really enjoying this game. There's so much to explore -- so many planets to visit, so many biomes to explore and there are settlements and npcs, and you can build your own colony. The building and the crafting are easy to do. The quest story can be challenging but gather better weapons and build some 'armor' and I had no problems. It took a while to get use to the survival mode where you had to have food but that was no problem once I got some crops of potatoes and rice going. I did have to download a mod to get the zoom level that I want for taking these screenshots. 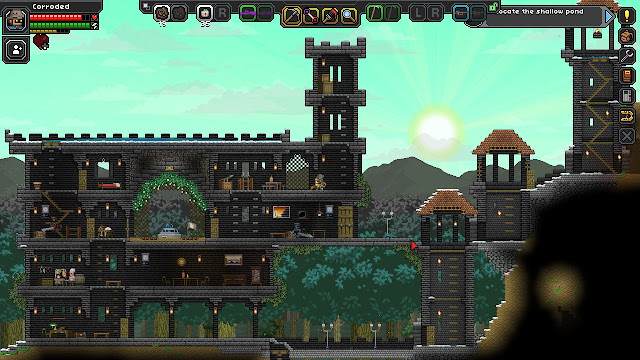 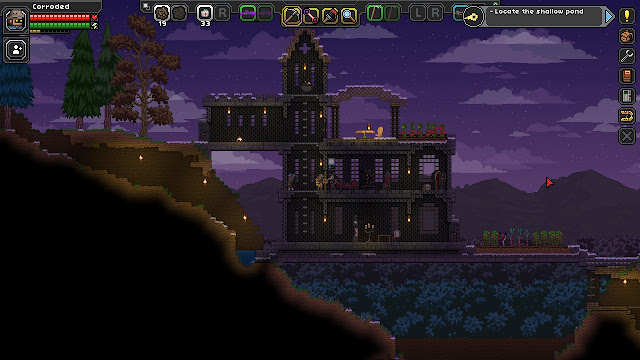 Posted by Ravenblack at 7:53 AM No comments:

Junk Jack iOS has been updated to 3.0, effectively making it equivalent to the PC version. The update also causes files of the previous version to become inaccessible. Whether this means that someday they will become accessible again remains to be seen but for now, they are as good as gone. Restarting and recollecting planet portal pieces is going to be chore. I wish it isn't such a grind, but it is what it is. I'm not sure if I'll play this game as much as I did before.

I've also been playing Starbound on PC. I love it, feels like something between Terraria and Junk Jack. I didn't like the hunger meter at first but I've learned to cope with it; it isn't too bad once you have a few crops of potatoes and rice.
Posted by Ravenblack at 12:46 PM No comments:

From this last year: 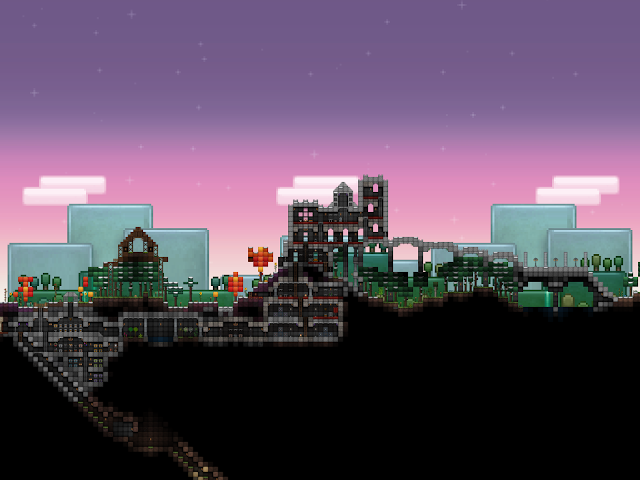 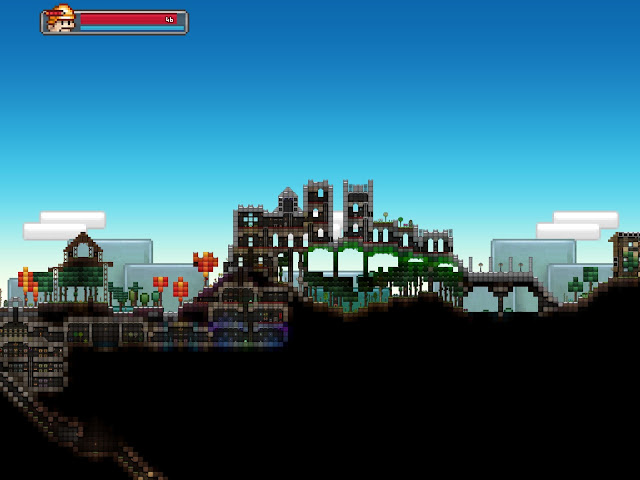 I'd leave this game for months at a time and come back to add some stuff now and again. I love how ever update to the game brings something new to discover and collect. I'm excited about Junk Jack X going to the PC even though I don't think I'll be playing it on that platform, I think I'm just happy the game is expanding and the devs are able to bring the game to more people.

Posted by Ravenblack at 2:24 PM No comments:

Junk Jack X - The build that didn't quite workout

Wouldn't it be cool to make a great big fish tank surrounded perhaps by modern buildings filled with aquariums. 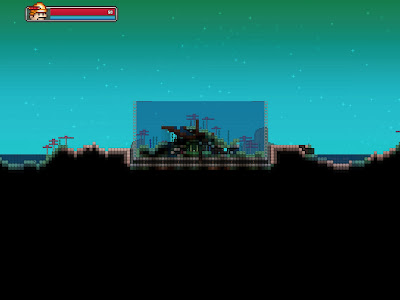 It came along quite nicely at first. An underground cave assessible via a passage, and an embedded shipwreck.Then I discovered a lot of things like furniture and plants can't be placed/planted in water. And of course the fishes in JJX are invisible unless you catch them first and put them in fish tanks, and fish tanks can't be placed in water.... I thought I could surround the glass tanks with blocks but then the darkness generated monsters in front of the fish tanks. It just couldn't work out nicely. 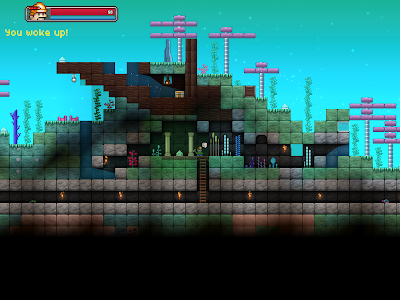 I'll revisit the idea again someday, maybe make it not so big.

Junk Jack X: A Big Tree To Live In. 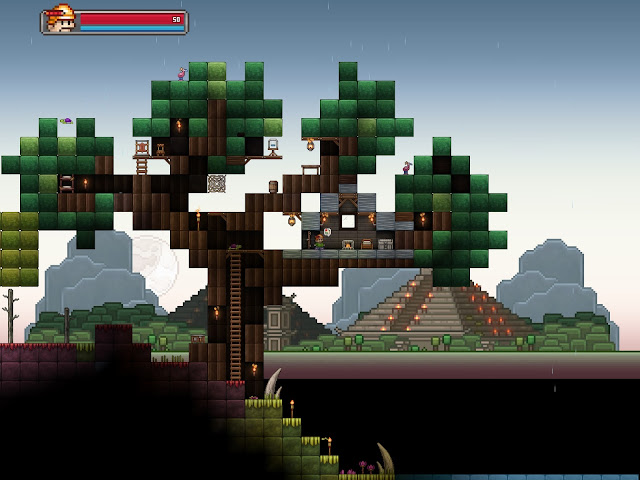 By the way, this is not how my ipod touch looks like now...